Bratislava is the first city in Eastern Europe to have an EV charging station that is fed both by the grid as well as a battery. The GridBooster combines two fast-charge stops with CCS and ChaDeMo.

Developed by Greenway, the so-called GridBooster got an extra battery capable of storing 52 kWh of energy and dispensing up to 60 kW of power at once. Installed at a shopping mall, the new station will also be able to charge up to four vehicles at the same time. 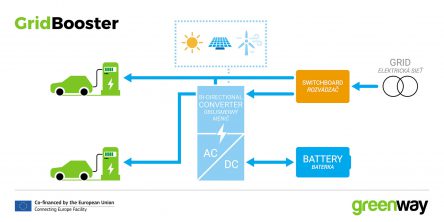 The installation was funded through the EU Commission’s CEF scheme (Connecting Europe Facility) and is part of the TEN-T charging corridor. Greenway will operate and maintain the charger as part of its EV charging network in Central and Eastern Europe. The fast charger and battery technology are provided by Delta from Korea.